In 2012, I spent the summer with my parents in their home in Santa Fe, NM.

Most mornings and evenings, they headed out for walks. They had to get their little coyote-looking dog Ginger out, but the walks saved them from life’s daily stresses.

Most times, I was invited. Often, I joined them on the streets winding around adobe homes, dirt paths, and arroyos. I learned “a little walk,” unless it was dark, typically took an hour. So, sometimes I declined in honor of time and solitude.

Often, I heard my stepmom say, “I’m a little tired. I’m going for a walk” or I could see her emotional edge (we all have one) sharpening. Those moments called for solo walks with Ginger.

They both returned brighter and kinder. The desert air, the smell of dirt and pine, and the expansive skies covering the Land of Enchantment can clear the blues.

Back in junior high, my stepmom introduced me to running by entering a ten-mile race through the Garden of the Gods in Colorado on the day she married my father.

At 14, my skinny legs and thick willpower carried me through the course.

Mary Jo was a runner. So, I became one. Not a jogger. Certainly, not a walker. In my mind, walking was what old people did in malls.

I ran through my teens, 20s and 30, but by my forties, my body wasn’t as forgiving. Yet, my mind couldn’t imagine the power of walking, except for wimps. I’m not a wimp!

Neither are my parents. Now in their 80s, they’re big time drinkers—of water. They’ve travelled the world, and ridden bicycles across the country on serious trips: across the Great Divide, from New Mexico to my dad’s high school reunion in South Dakota, and one summer they rode 4,000 miles from Virginia to Oregon, covering over 50 miles on most days.

So, it shouldn’t have surprised me when, the summer of 2012, my dad met my offer to join him on a bike ride with, “I need to get a real workout in.” Ouch. Hey, old man!

He was right, though. I couldn’t keep up with him mountain biking on the trails, and though I intended to, I never made it up the vertical-as-a-wall killer hill he took like a 12-year-old.

Between bicycle rides, walking served as my parents’ constant. Like water, it’s the simple, almost unnoticeable key to health and longevity.

As Artist’s Way author Julia Cameron states, “You might walk out with a problem, but as you walk, you come into a solution.” She added walking as a third tool for writers, after morning pages and artist dates.

Between Ms. Cameron and my parents, walking became my secret weapon.

Even if walking doesn’t bring me to a solution or resolution, it transforms me. When I’m angry, I must run, but when agitated, irritated, or tired, walking offers revival. It can be medicine, but it’s best taken daily like vitamins.

After that summer in Santa Fe, I returned home to Minnesota, but not to my husband. Yeah, I’d learned to walk in several ways.

Anyhow, in my next chapter, I took up walking with my new neighbor Michael and his German Shepard Jessie. As Michael and I walked among the Victorian homes of Cathedral Hill, St. Paul, we discussed men and women and relationships.

Each step dropped our defenses and forged a friendship I doubt would’ve happened over coffee or meals. Walking made talking easy.

I also walked alone, slowing into the pace of poetry.

Later, when I moved to Worthington, OH with my sister Jayne, our evening walks tamed workday stresses and unraveled the threads of grief, relationships, and childhood memories matched with our adult perspectives.

During winter, my sister and I long for and lean into spring so we can get back to our synchronized steps.

Up until a year ago, my Labrador Phoenix joined us. There’s nothing like a dog to get us out for walks. She’s gone now and it’s more of a chore to drag myself outdoors during the cold days.

Still, every time I go, especially stepping into the woods and letting nature return me to mine, I’m better for it.

On my most recent visit with my parents in their new small Santa Fe apartment, I said, “I need to get out for a walk. Would either of you like to join me?” They both declined the cold. The wind of their aging blew through me.

Of course, we shared many walks that week: down Canyon Road by art galleries, along the downtown arroyo surrounded by glistening yellow Aspen trees, and a drive out close to my folks’ old neighborhood where Ginger could run free as Mary Jo and I plunged up and down hills and through sandy arroyos where she lost her hat and we had to go back.

Walking carries us back and forward, to reflection and perspective of beauty that a drive, or even a bicycle miss.

Ginger is slowing. My parents are growing into what, despite their health, is old age. My companion Phoenix aged out.

I try to pick up the habit of running again, but I’m thankful my parents passed onto me a new constant to carry me through life’s daily joys and challenges.

So, when you’re feeling lost or blue, I encourage you to get out and experience the magnificence, simplicity and magic of walking. 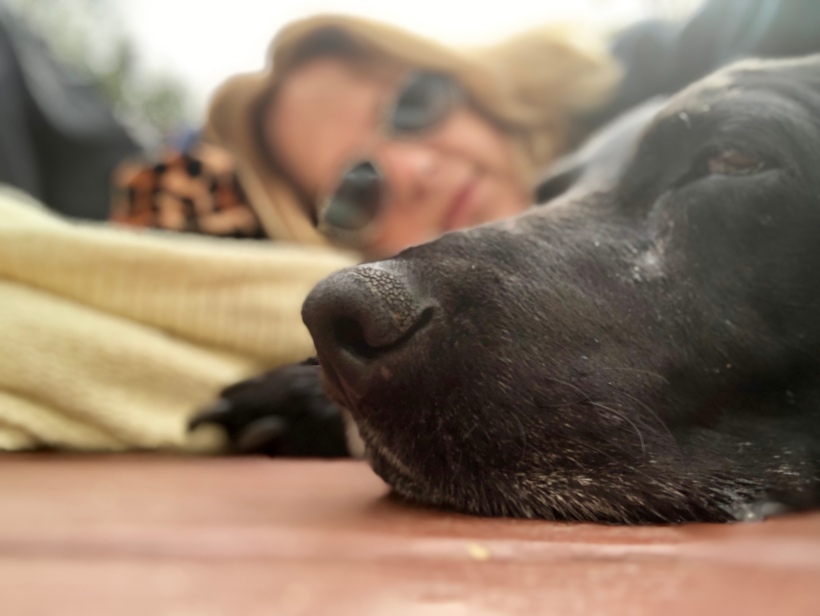 I had to have my pal Phoenix put down. I’m still in shock. The house feels empty. I’m the only one here. It’s been Phoenix and me for so long.

Anyone can own a dog, but sometimes a bond beyond explanation is born between person and dog. It’s obvious good fortune, a gift, a blessing. God’s knowing.

Of all the impossible and unforeseeable twists and turns that had to occur—me coming upon a desire for a puppy at the time Phoenix arrived in the world, locating her through my neighbor whose cousin bred Labs, and having her brought home when I told my then-husband to get the other pup—sings of synchronicity.

Destiny delivered a special soul in a Black Lab body to partner with me on my journey.

Love was Phoenix’s mission; I was her assignment.

She loved life, chasing balls, hanging out on the deck, walking in the woods, greeting neighbors, and spreading joy.

Phoenix was partial to her own kind when it came to dogs. Labs had an automatic in.

She loved most people but picked her favorites: like Carol, who connected with Phoenix on a trip to the beach in NC and her husband Pete, who Phoenix took to like a long-lost father, and Wayne, who Phoenix walked beside—no leash required.

Phoenix chose me as her favorite person. If dogs got tattoos, Phoenix’s would’ve said, “I’m with her.” Her gentle, undivided loyalty poured forth pure and untainted by the world for 11 beautiful years.

I never celebrated her birthday before, but this year felt like a major milestone.

She seemed to know. She made it a good one, with a long walk three doors down to the neighbor’s coveted healthy, lush, green grass. She made herself at home as if the world belonged to her. I sat down and pretended too, practicing Reiki, prayers, and presence on someone else’s lawn.

It didn’t matter. We were grabbing the good, our final togetherness.

Before we had to let go.

Somehow, Phoenix’s body broke down. Maybe for the simple reason life doesn’t last forever and there are many paths to getting out. We all go out. Ugh! The fact I don’t like.

I don’t like saying goodbye; I’ll never see you again. The worst!

However, if I’m going to keep living, I ought to find a better way to go through grief. These are the things we think of on Grief, Day 1… Maybe we can logic our way around. HAHAHA!

My heart hurts. My baby’s gone. I miss her presence, energy, persistence, her black shadow everywhere. I miss her marble-brown eyes looking into my soul. I miss laughing when she ignores me and walks away to sh*t in the neighbor’s yard at 3 am.

Missing my companion makes me miss my dead boyfriend even more. Isn’t that crazy?

Maybe it’s because Phoenix was “just a dog” in the way that Kevin was “just a boyfriend.”

Now, Grief walks in. No handcuffs. No threats. No tricks.

She reaches out her hand in invitation: “Come, walk with me a while again. We’ll journey deep but rise like dolphins out of water. We’ll return with radiance polished like diamonds.”

“Yep,” she says. “That happens when you’ve been looking at me for a while.” Then, she asks, “Are you ready?”

We don’t know what we’re ready for! Can we prepare for Grief? No, preparation isn’t necessary, but it helps.

It helps to be grounded.

If you’re not grounded, Grief can f*ck you up as bad as your worst bad, bad girlfriend.

Grief can make you love her and let her move in, not just to your home, but your heart.

Grief can take over your emotions the way a spoiled girl takes over closets.

Ah, but Grief carries crazy-cool wisdom woven in her womb. She’ll crack you into something new. She’ll sprinkle enlightenment around you and teach you how to feel the music in your blood. Grief will caress you and honor your secrets. She’ll comfort you in memory and heighten your senses.

She’ll make you think you’re high or crazy, but you won’t care. Once you have the courage to climb in bed with Grief, you may resist the world the way a teenage girl falling for her first boyfriend resists her parents.

Because that’s where the juice of life lives—where the heart and soul dance with unbridled emotions and the mind is merely a witness, all previous lessons dismissed.

While some people run from Grief, knowing she’s a too-large wrestling partner for their likes, the brave lean in. But, the wise don’t get lost or stuck.

I intend to be wise this time. Grief smiles as she takes me for a little spin.

Thanks for landing here! I hope you connect with my stories and voice and you want more. If so, please FOLLOW ME. It’s so much easier than me stalking you. Authentically, Alice Lundy
Follow Alice in Authorland on WordPress.com
Join 630 other subscribers