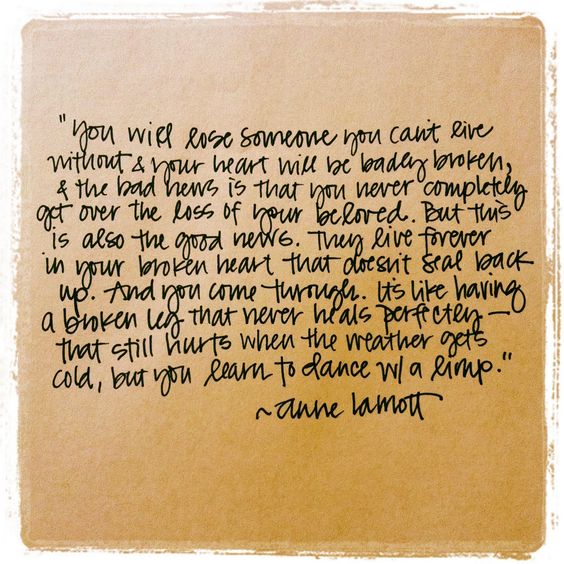 I didn’t just lose my boyfriend. I lost the man and relationship I spent five decades looking for, the one that fit me—in all of its imperfection. I lost my sense that I belong in that special club for two.

I never really believed in “the one,” but of all the men I’ve known and loved none of them knew me and loved me the way Kevin did. He said the same thing about me. The cool thing was both giving and receiving unconditional love, living in a no-bullshit zone.

Now, a year and a half after his death, I’m back to the bullshit. The people who think they know me may, but I don’t feel truly known or able to reveal myself fully because what I am now carries such sadness.

I spout off about grieving taking as long as it takes, but I’m pissed off that it’s taking so much of me.

I’m no longer in despair every moment. I set goals. I go forth. I attend events. I laugh and mean it. But, the backdrop of it all is the desire to go back to being with my beloved.

The truth is the extraordinary events without his presence on earth rarely stir me as much as the seemingly ordinary events like watching TV, talking on the phone, or sharing coffee did when he was alive.

Kevin was my man. He once said he wanted me to look at him like, “I know he’s an idiot, but he’s my idiot.” I did—when it came to my less-than-favorite of his tendencies, as he did mine.

I didn’t have to convince myself to overcome my feelings or force feed myself into affection, conversation or presence.

That’s always been an issue with me—being told what I should feel—often by myself and certainly by other men.

Kevin respected my feelings, even the irrational ones. I wasn’t put off by his bullshit, not after we went from friends to our all-in relationship.

God, please forgive me for wishing another one of those fools I loved would’ve been the one who died instead.

I guess all I can do now is love myself the way Kevin loved me—with appreciation for my femininity and humanity.

What would Kevin say of this grief? He’d hold me through it, as I did for him with the grief he carried over his mother’s death.

She died in 2012 and in 2014 it was still eating him inside, although few knew the extent of his pain, although many must’ve imagined, knowing how close Kevin and his mom were.

It sucks that Kevin is not here for his father as he committed to be. Around Thanksgiving in 2015, Kevin was in Tampa with his father when the doctors considered cutting off “Coach’s” big toe due to diabetes. Kevin was relieved when his father bounced back and basically told his sons to get out of his house and hit the road.

Kevin made it clear to me when the time came, he’d be there—in Tampa—for his dad, even move there, whatever was required. I respected that.

Of course, Kevin couldn’t imagine he’d be dead when the time came. Or that his dad and twin would truly be scared when Irma hit Florida recently.

Or that at age 86 Coach would conclude doctors cutting off his foot was the right move. So, now that’s happened.

I can’t imagine having a foot cut off, but I suspect Coach would say losing his son was harder.

I didn’t just lose my boyfriend. I lost knowing the people he loved were better off because he was there for them—physically present without being asked, speaking directly, kidding and seriously making life easier to manage.

I feel helpless—for a foot that’s been cut off and a twin brother who’s shouldering the burden Kevin would’ve willingly carried.

This is the journey. This is the chaos of emotion one doesn’t master, but learns to live with like a missing limb.

“Life is a continuous balancing of love and loss, because in order to have any loss mean something, we first have to have something we truly value.” ~ Alexandra Stoddard

There’s a chasm between wanting to be over the grief of my beloved dying and clinging to the chaos born from his death.

After losing a loved one, this is the brave dance we do. We wrestle, grapple, fight, resist, and take ownership of our grief. We acknowledge, admit and attend to the full array of feelings which arrive with sorrow’s storm.

Many choose not to undertake this step. They prefer denial and bucking up. I don’t blame them. I’ve been there. I’ve tried the detour.

Folks are free to choose any path that works for them.

However, this time, I just can’t go around. I’m in the mess as much as I was into the relationship with the man I love who died a year and a half ago. A man I called Fire who burned bright right up until the night he died unexpectedly in his sleep (damn heart attack!).

Since his death, I’ve grieved like it was my profession.

Grief has been an honor, a spiritual opening and a building of my emotional biceps. And yet, even athletes don’t stay in the gym all day.

A friend recently asked me, “Do you think it’s true that the greater the love the deeper the grief?”

I said, “Yes, with a caveat.” (Because I love saying that word.) I had great love, as did my sister. So did the woman standing before me asking the question. We each still experience deep grief.

And yet, I don’t think the longer and harder one grieves is the measure of their love. With hard loss comes pain. How people cope is as individual as the paths to love.

For me, grief is a challenge, gift and opportunity bestowed upon me by the grace of a sacred love I was lucky enough to live. The aftermath is wretched. And it’s beautiful. In this moment, I vow to do my best to grow from it.

All the men you loved before were

Mountains you climbed to get a better view.

When you could see further, you rose higher.

Don’t judge yourself for being at those depths.

Or determine that the men you meet up here

Resemble those who broke your heart yesterday.

They served as partners on your path.

And no, you weren’t lost.

You could not have arrived earlier.

The journey, with all its twists, was yours to make.

You set out to take each step that led you here.

With a man who slayed a few dragons

And dealt with no-doubt duplicitous females

On his travels and tumbles to get to you.

Here’s a man—scared and brave, showering

You in his love, lady, baby, little bit crazy pants.

This enchanted chapter is yours.

Check out the view! This is where you dance.