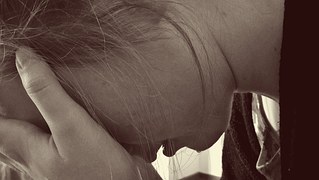 My friend and I had a conversation about positivity. She said she didn’t want to talk about everything. She sees power in rising—applying a positive attitude to things and moving on.

“I don’t see what’s wrong with that,” she said.

Nothing’s wrong with that. I get where she’s coming from. For most of my 20s and 30s I immersed myself in the positive-thinking, self-help world. That world saved my suicidal self and infused me with confidence and optimism that made life worth living.

Positivity can be a tool. It can also be used for denial. My friend said, “Sometimes I just don’t feel like being sad.”

I get it. Back in the day when my Tony Robbins muscles were strong, I’d change my state and move along. I spent a lifetime spinning positive. That mentality certainly served me well in sales.

My recently deceased boyfriend worked and made a solid living as an independent salesman up until he passed. But sometimes, he could be so negative! It baffled me.

“This shit’s not going to work!”

“My license isn’t going to be approved.”

“These leads are shit!”

Yet, he kept on working and kept on selling. To say Kevin was more successful in sales than I was would be like saying the dog whisperer has better control of his dogs.

It kind of scrambled my brain to think of all the mind tricks and positive affirmations I repeated to play the sales game, and the game of life.

Maybe it’s just what works for each individual. Why would I fight the idea that positive thinking and rising is a respectable endeavor? That’s been part of my identity and life philosophy.

In college, I sold books door-to-door for Southwestern publishing. They taught us to think of three good things about any problem we encountered: flat tires, rude people, etc. During those years, I devoured The Greatest Salesman in the World, Think and Grow Rich, and Life is Tremendous. I believed it when I read Now Is Your Time to Win. I stood ready to rule the world.

I was 25 when my brother died at age 27. At the church, in the bathroom, before his service, I almost lost it. I had to pull myself together!

Ok, Alice, I instinctively thought, what are three good things about this? I can’t remember if I came up with any. I do remember my brain experiencing some sort of schism.

I pulled myself together. I rose. I held my mother’s hand. When called, I walked to the front of the church and read a passage from The Greatest Salesman in the World: “I will greet this day as if it’s my last.”

I changed my state and squelched my tears, but over the years I’ve concluded there are no good reasons for my brother dyingso young  in a car accident. I’ve come to believe in the value of tears.

It’s not the sadness we fear, but the vulnerability. To cry, weep, or get angry for women like me, to not have control feels vulnerable and that’s scary. If I’m not in control of my emotions, what am I—crazy, a bitch, or just the whispered, “She’s having a hard time”?

After my brother died and my mom lost her job, she came to live with me in Denver. We were into all kinds of PMA. We went to a couple of seminars together and shared books. I traveled for work and when I came home, I told upbeat tales. My mom held real hope when Bill Clinton was elected.

We had no idea that would be the last election she’d vote in. Five years to the day of my brother’s death, my mom was diagnosed. She died of cancer four months later. Her grief over my brother is what really killed her. The light rarely returned to her eyes after her only son died—no matter how many positive phrases she repeated.

I couldn’t see anything wrong with not wanting to feel sad. I put everything I could muster into a positive light. I spent a lifetime seeing good in people, even my rapist.

I didn’t want to deal with that. Or my first divorce. I moved on. Everything was bright.

I married again, now an expert at burying my feelings so deep that I had no access to them. I kept telling myself what a great life I had, how happy and lucky I was, but I didn’t feel it.

Brene Brown says, “When we numb the hard feelings, we numb joy, we numb gratitude, we numb happiness.” It’s like squelching the juice of life.

One of the things I most respect about my sister is she honors her feelings. When her husband died, she did grief with a grace and honesty that included being vulnerable, sad, mad, and wretched. She also consistently took steps in a positive direction. She manifested a new life after losing the one she’d loved all of her adult years.

I saw how deeply Jayne’s husband’s death hurt her and how the experience—allowing it, not fighting, denying or pouring pink paint over it—transformed her.

Tears have value. Pushing sadness, grief, or anger aside, suppressing painful emotions causes manifestations of those emotions in the body. They do not go away. When sadness and heartache make a home in your body rather than flowing through, they invite pain, disease, and cancer.

Crying is part of the body’s natural way of processing emotion, just as is laughter. As throwing up is your body’s way of ridding itself of toxins. Sure, you can take some medicine or force yourself to keep it down.

I hate throwing up, but I always feel better after. It’s owning the sickness and allowing it to move through.

Same thing with crying. It’s owning the sadness, the madness, the human condition. And, I don’t see what’s wrong with that.

2 thoughts on “On Positivity”