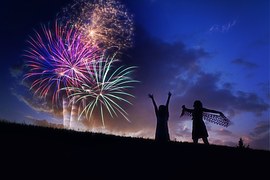 I started to send my nephew a text: Happy 4th of July! I stopped—the 4th. My boyfriend Kevin died on March 4th. It’s been four months.

I shouldn’t have a calendar in my head for these things. I rarely remember my nephews’ birthdays, but death imprints itself upon my brain. December 10th, April 28th, March 4th. Fuck the 4th and the 10th and the 28th! And Tuesdays, Fridays, and all the days people die on. My friend’s brother died on June 14th. Found on his kitchen floor—his last mess at age 61. Fuck the 14th.

As if life isn’t hard enough, my heart hurts watching the news. Sometimes I force myself to avoid it. It’s too much pain, like all of humanity is breaking. My heart aches for those who’ve gone numb or crazy and those they take it out on irresponsibly, too often violently. I worry about our collective society.

All the while, Kevin’s death scrolls like the news feed across the screen of my life. I grapple with logic and buck-up bullshit I don’t appreciate others saying. I wrestle with my grief as I reach to overcome it.

It’s Independence Day! I want to celebrate my independence and my freedom, but that’s not how I feel. I feel hollow, sad, and sick with grief.

After Kevin died, I no longer hold my independence like a trophy. Just an empty hand that he held too tight and made feel so right. Freedom? What’s freedom if you can’t enjoy your deepest desire?

Last night, I watched Extremely Loud and Incredibly Close. After Oscar lost his father on 9/11, the boy began chasing time, his father’s clues, and the impossible. Yep, that’s what grieving humans seek.

Our country’s founders pursued the impossible when they formed the United States of America. Today it feels like we’re all divided—like the divisions in my heart—pieces trying to break off and walls threatening to be built.

Still, something fierce inside me fights. I call upon my bravery and beliefs. Freedom is responsibility and independence a gift.

We’re all united in this thing called humanity—complete with hardship and heartbreak, death and birth, beauty, fireworks and a thousand things worth celebrating—even when it hurts. So, here’s to the 4th!